Every year I sign up for the Goodreads Reading Challenge. You set the number of books you’ll read that year, Goodreads tracks them, and you get your total at the end of the year. I read most books on Kindle now because I have no room to store analog books, and sometimes when I do read a hardback or paperback, I forget to update Goodreads.

I set a goal of 40 books this year, which doesn’t seem like a lot, and I probably read closer to 60, 46 of which got entered in the Goodreads challenge. Some were breathtakingly wonderful. Some were meh. Some were godawful.

But let’s not focus on the negative. It’ll be a New Year here in a few hours.

Here are my Top 5 books I read in Nonfiction and Fiction.

Most of my nonfiction reading is for a monthly, political book club. Most of the books we select to read are on the progressive side, though we’ve tried reading something from the “other” side. We’ve almost universally disliked them.

Here are my top five: 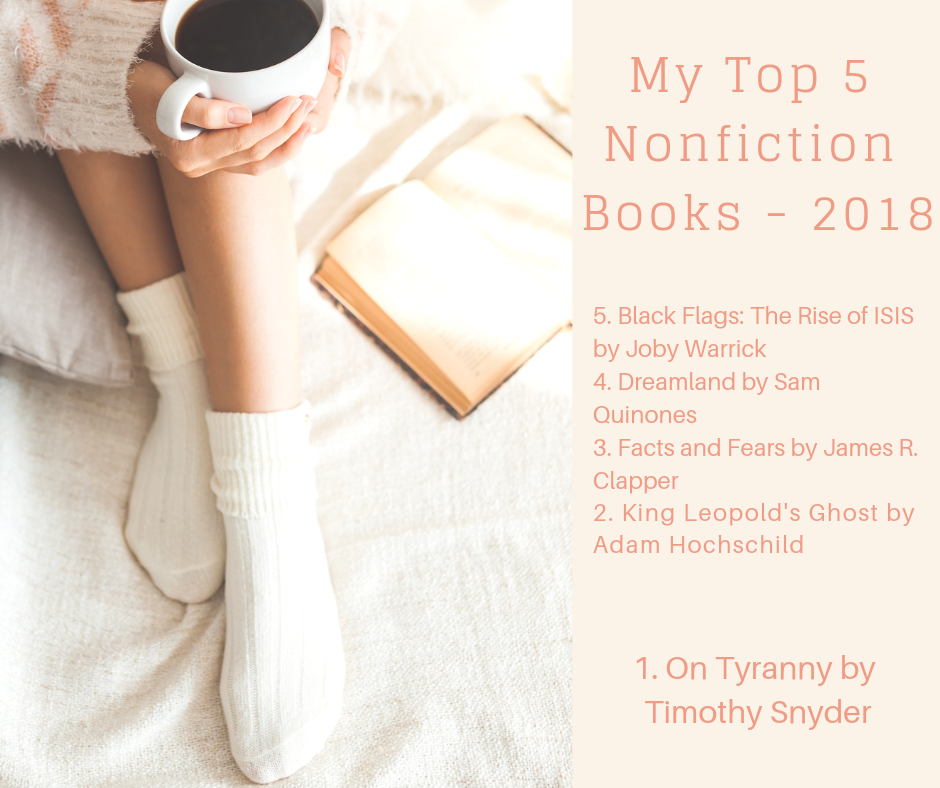 5. Black Flags: The Rise of ISIS was a timely book to read and provided me a better understanding of which disparate groups merged to form ISIS or ISIL or Da’esh, whatever the favored term of the day is. I’d say it’s a near must-read if you truly want to understand the members of ISIS are terrorists and not your typical Muslims.

4. Dreamland. I, personally, have not yet been touched by the opioid crisis, and this book certainly put a real face on it and outlined the causes. If your concept of an opioid addict is some junkie living on the street somewhere, you’ll be forced to realize he or she may be occupying a room in your house. A harrowing portrayal, sometimes with no happy ending, but it does provide understanding.

3. Facts and Fears was a thoroughly interesting read, as Clapper went through his entire career in intelligence. He focused on current events only at the end when his career concluded with the Obama Administration, and I certainly wanted more of that. However, his observations on the current state of disconnect between the White House and the intelligence community are enough to make you worry.

2. King Leopold’s Ghost was one of the most difficult books I’ve ever read. Leopold was a narcissistic, insecure, grasping man determined to beg, borrow, or steal an overseas empire for Belgium. His policies toward the Congo reverberate even now, and you’ll find yourself stunned by the utter cruelty and racism Leopold and his bureaucracy practiced. This was a part of history I’d never studied, and this was the perfect book to fill the gap.

1. On Tyranny is a small book, both in pages and size, but crammed within those 126 pages are numerous concrete examples of how the rise of fascism and accompanying tyranny is something we’re experiencing right now. I honestly want to reread it and take notes. Moreover, I wish I could gift it to every American.

I’m sure you’re thinking since I write espionage and historical fiction, that my top five would be heavily biased toward that genre. The truth is, I have eclectic taste in fiction, and I don’t always read what I write–though I got a number of John le Carre works under my belt this year.

Here are my top five fiction books I read.

5. The Plot Against America was in a genre I generally avoid: Alternative History. However, I think only Philip Roth could have turned that genre on its head. Not only was it believable, it was depressingly so. This novel was published well before our current unpleasantness, but it resonated perfectly. Though I was a bit disappointed at the ending, the way the story unfolded using a “typical” American Jewish family in the 1930’s was perfect.

4. Forever and A Day does fall in the Espionage genre and is a very believable James Bond origin story, i.e., when he first receives his double-o designation. It has all the typical JB elements: evil to overcome, a beautiful woman, but this freshly-minted assassin James Bond comes with self-doubt and over-confidence both. The plot isn’t original, but the portrayal of James Bond at the beginning of his career is worth reading. (This book was authorized by the Fleming estate, and the author has written other James Bond books.)

3. I should lump all three of Tom Callaghan’s “A Killing…” series in here. He’s published one for winter, summer, and spring, and the one for autumn is out in Europe but not here yet. His stories are violent and gritty but apt for the part of the world he writes about. In all this, his protagonist is a decent man in a corrupt society and tries to assure justice is done. The plots are intricate, and you’ll learn a great deal about one of the former Soviet territories.

2. The Fifth Season is the first book of a trilogy and the first scifi/fantasy book to capture my attention in a long time. The writing is pristine, the world-building stunning, the language beautiful, and all the threads are woven together so well I found this book beyond belief. I’ve finished the second book and am waiting to read the third at a time when I can savor it. All three books won scifi’s top award, the Hugo, and its author was the first person of color to win three Hugos in a row. You cannot call yourself a scifi fan (or a scifi writer) unless you’ve read this. The last science fiction book that grabbed me this way was The Mote in God’s Eye, close to forty years ago.

1. Lethal White is probably the best book J. K. Rowling has written. Don’t hate me. I love the Harry Potter series, but the Cormoran Strike series is thoughtful, meaningful, and real. In the afterword to Lethal White, the fourth in the series, Rowling declares it is her favorite book she’s written, and I agree. I liked the first three Strike books, but this one is a tour de force. (I also found that the first three books were made into a BBC series, “C. B. Strike,” which I promptly binge-watched. Also excellent.) Lethal White lays out the sometimes plodding private detective work in a thorough way, intersperses it with action and suspense, and balances the main characters’ personal lives perfectly. I was recently discussing these books with another writer and said, “Comoran Strike is such a well-developed character you want to mother him one minute and f**k him the next.” My friend agreed.

There you have it. My end of year lists. Which of these have you read? Do you agree or disagree with my conclusions? I’d love to know.