Here I am, an indie author begging again.

I have a newsletter where you can learn more about what inspires me, get excerpts of my upcoming works, and learn a thing or two about the world of espionage. I won’t fill your inbox with countless emails; it comes out twice a month–and you can always opt out once you sign up.

Oh, and if you sign up for SECRET BRIEFINGS between now and the end of the year, I’ll send you a free paperback copy of a short story. You can choose from one of four:

“Spymaster” – The heads of two intelligence organizations clash in a mini-Cold War.
“Blood Cover” – Mai Fisher talks a doctor into marrying a man she doesn’t love so Mai can have access to his secrets.
“Best Served Cold” – Computer guru Nathan Hempstead loses his son in an horrific manner, but his hot anger becomes cold revenge.
“Brave New World” – A U.S. president wants help fixing an election, but Mai Fisher refuses, something she may come to regret.

In addition to my Facebook Author Page, I’ve also started a new Facebook Group called “Readers Who Love Real Spies with Real Lives.” If you join, we’ll talk about books and movies in the genre, with an emphasis on those with strong, female protagonists.

There’ll be posts to stimulate conversation and some fun things, too, like “What Would Your KGB Code Name?”

It’s free and fun, and you can join on the group page itself.

This year I won my tenth NaNoWriMo and what better way to celebrate than to put some of my books on sale.

From November 28 through November 30, you can get the ebook of Blood Vengeance and The Better Spy for 99 cents.

From November 28 through November 29, the ebook of Spy Flash II will be 99 cents.

Any of these three books are a great introduction to my canon of works about “real spies with real lives.” Definitely money well spent.

You can buy them by clicking here.

I haven’t updated at all until now about my progress for National Novel Writing Month 2016, mainly because it went so smoothly. I reached 50,000 words on November 13. A record for me, by the way.
I don’t know why the words came so freely this year, other than I had a solid idea in September and fleshed it out (notes, not an outline) in October. Some things that had happened in my past had long been waiting for a way to express themselves, and it turns out the idea for this year’s NaNoWriMo was the perfect medium.

In 2012 I wrote a piece of flash fiction, which was well-received on a site where I posted short fiction in response to a photo prompt. The flash fiction piece was about a young woman hiding the body of a baby in the wall of a half-finished house. Almost every commenter said, “You have to tell the story of how that happened.”

In November 2012, I did, and the result was Supreme Madness of the Carnival Season, a literary novel about a successful author (so, not autobiographical) and her husband who find a baby’s bones in the wall of a room they’re renovating. The author, who’d suffered a stillbirth some years before, wants closure for the abandoned baby and sets out to find who put the baby in the wall.

The novel’s working title was “Amontillado,” from Edgar Allan Poe’s story, “The Cask of Amontillado,” which involved burying someone alive in a wall. As the story moves back and forth in time between roughly present day and 1944, the author has to face reality about her life and her marriage, but the twist comes when she discovers whose baby ended up in her wall.

I intended for it to be a standalone, but as someone who beta-read the MS pointed out, I left something hanging.

For NaNoWriMo 2016, I brought some of the characters from 2012 back, put them solidly in 2016–more or less–and had a new secret dumped in the lap of the author, another mystery for her to become involved in.

This one is more of a “real” mystery–I think–though like Supreme Madness the death in question occurs some years before, it’s pretty obvious who did it, but there’s a twist at the end.

This year’s working title is, Mournful Influence of the Unperceived Shadow, taken from a line in another Poe story, “The Tell-Tale Heart.”

Yeah, I have a Poe thing. In fact, he watches over me as I write. 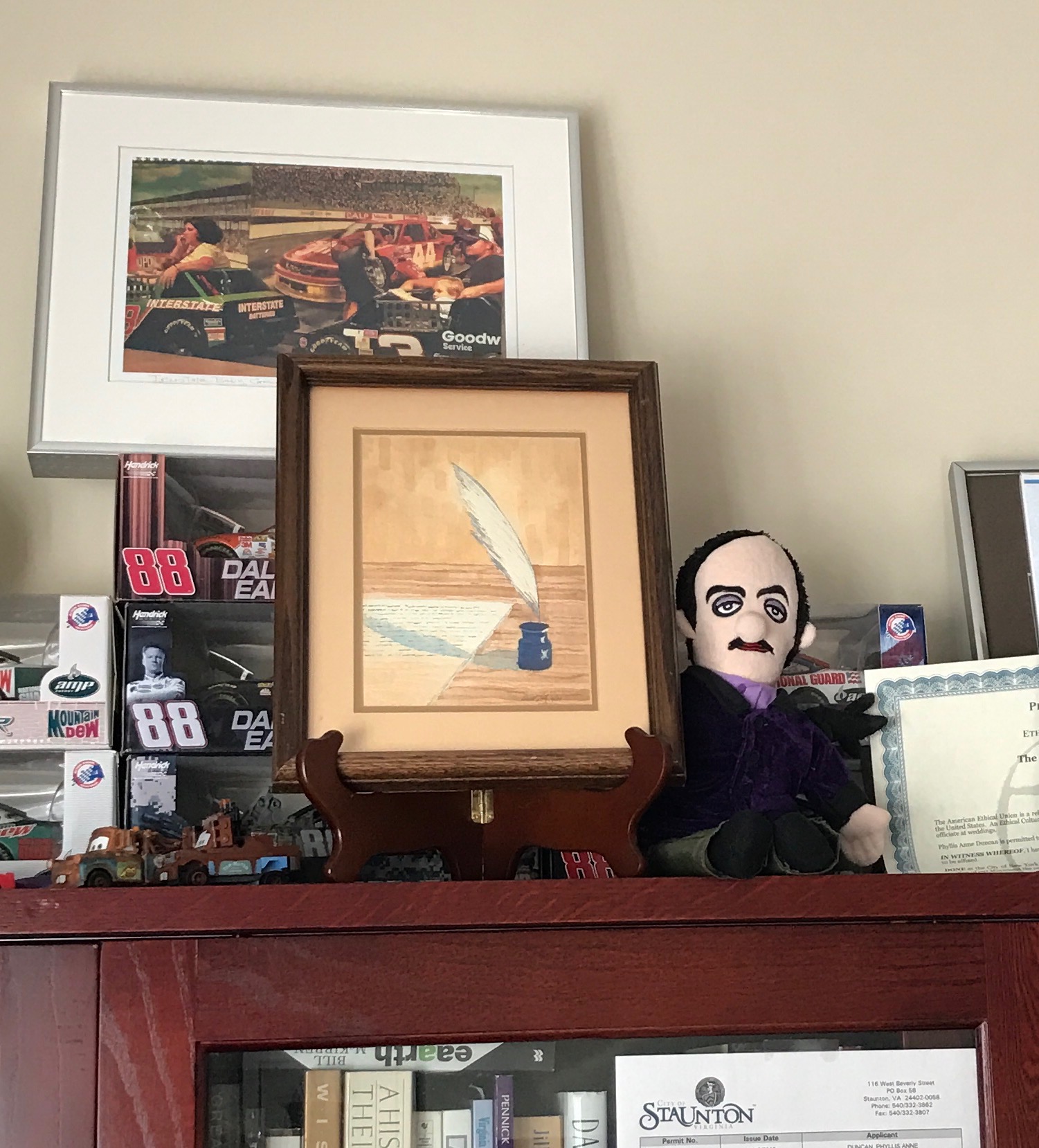 Edgar Allan Poe, watching from his perch atop my bookcase. 🙂

I’ve met (exceeded) the word count goal for NaNoWriMo this year (60,521 words) and have been working on winding up the story. I’m down to the last few chapters and scenes, and for some reason I’ve put off drafting them. I know where I want the story to go, I know the ending, but I’m stalled at getting there and didn’t know why.
The recent turning back of the clocks means I’m waking at 0630 (really 0730 to my brain), a time just before dawn when there’s some light in the sky–enough to wake me–but it’s still quiet before neighbors get moving off to work. The last few days I’ve used that time to lie in bed, run through the story thus far, and think about how to get to the ending.
This morning I realized I was putting off writing the ending because I abhor stories where the resolution is that the female protagonist is in danger and has to be rescued by the male protagonist. This isn’t a new thing. I’ve always hated it.
When I write my spy stories, my female protagonist never hesitates to face danger because, hello, she’s trained to deal with it. This year’s NaNoWriMo story features a strong woman, but she’s an author and former English professor–not a kick-ass heroine. The male protagonist is a former Army Ranger turned private investigator.
Ideal set-up for the dreaded, female-in-trouble, man-comes-to-the-rescue ending, right?
That, I realized, is why I hesitated–no, couldn’t summon the wherewithal to write it. I would be going against my authentic self as a writer. And with that epiphany, came the ideal solution to the dilemma.
What is it, you ask?
Wait and see.
Yes, I’m evil that way.
P.S. If you want to read some excerpts, go to my Facebook Author Page or to my Instagram account, paduncan1.