Fifty thousand words in thirty days. A challenge to be sure. I hit 50,000 words on Day Twenty but continued for the rest of the month to complete a rough draft of the novel. That meant going back and filling in scenes I’d only made notes about and adding some back story to flesh out the characters.

Then, after thinking this was so far out of the cannon I’d established for these characters, I went back and bookended it with an opening scene and closing scene (let’s not call them prologues and epilogues) so that it could drop into the cannon I’d created.

The final word count: 73,956 words. (I always was an over-achiever.) The fun part will be in the editing to see if I add to that or cut mercilessly. 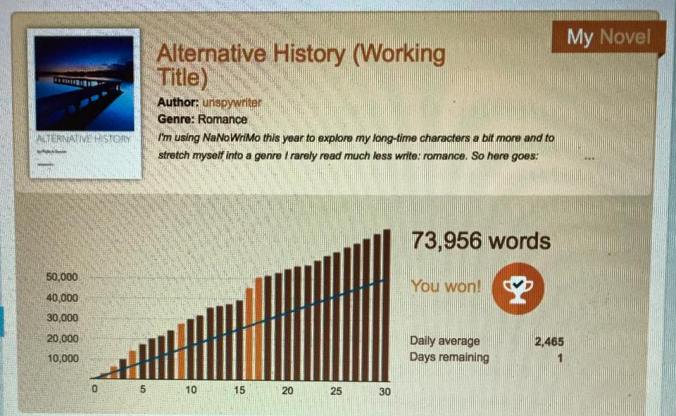 I got so much support from several online writer groups: Shenandoah Valley Wrimos (great in-person and online write-ins!), SWAG Writers, and NaNoWriMo Divas.

Of course, the rough draft only has a working title, A Future Stretching into Infinity, (yes, different from the one in the photo; I’ll make the change) and it’s yet to be determined if I can write romance. (Beta readers are going to let me know in January.) Overall, once again, I had great fun, with the writing, with the interaction with other writers, with the concept of plunking butt in chair before the computer and writing every single day.

Not to mention NaNoWriMo gives me a fresh, rough draft of a project to work on in the new year.

Will I do it again next year? Of course!

And a little P.S. here. For people who wonder why we do this or what comes of the drabble we write for those thirty days: We edit, we revise, and, on occasion, we start all over again and rewrite. What could possibly come of that, you ask? Consider this: I have two manuscripts, which began as NaNoWriMo rough drafts (one three years ago, one four years ago), now with a publisher, who is reviewing them. Look for some news (positive, I hope) on Wednesday afternoon.

One of the most fun aspects of National Novel Writing Month is you don’t do it alone. The instigators of NaNoWriMo encourage writers to meet during the month of November and write together in libraries and coffee shops and book stores, both to have the camaraderie and to showcase the fact you’re writers, writing.

The country is divided into regions, and my region, Shenandoah Valley Wrimos, is quite active. We’ve had some great on-line write-ins, but the best was today’s face-to-face meet-up at Panera in Harrisonburg, VA. Fellow Shenandoah Valley Wrimos Allison Garcia, Rebekah Postupak, Susan Warren Utley, Margaret Locke, and myself did word sprints (there were prizes), had some great food, and talked writing, writing, and more writing. I only got around 700 words done, but the company made the event.

Back home, I added around 2,900 more words for today’s total of 3,630 and one more chapter written and finished–Chapter 28, The Bad Guy. Here’s an excerpt–and a warning here, for it refers to someone planning a rape and murder.

Burkholder threaded his way amid the makeshift tent city, his boots quiet in the sand. When he reached the tent he wanted, he saw the light still on inside. He took up a spot where he could watch without being seen or challenged by any patrol. Even if he were, his ID and passes were in order. He was one of the construction workers, and he couldn’t sleep, just going for a walk.

Burkholder had been a sniper first in Delta Force, then discovered he liked close quarter killing better. There was something incredibly powerful about being able to look someone in the eye when you took his or her life. The eyes reflected such a panoply of emotions at that moment—denial, fear, bargaining, anger, acceptance, almost as if in those scant nanoseconds the victims went through all the stages of grief for the life Burkholder would end. Unlike some of his colleagues in Delta and now in Security Solutions, he had no qualms about the killing of women. Women were the best, the way they struggled, the way they seemed to offer him their bodies in exchange for their lives. He would take their lives and their bodies, too, sometimes as they were dying, sometimes after.

With Fisher, he wanted her alive when he had her, wanted her to feel her failure intensely as she died, his hands around her throat, his penis in her. He wished he had the time to tie and gag her, to make the rape last a while, but he’d have to be satisfied with a brief intensity, which could be just as satisfying in its own way. Too bad, too, he couldn’t have the light on to see her eyes, to see her realize she’d been conquered. For him, that was a powerful aphrodisiac, better than Viagra.

Her silhouette showed him she sat on her cot, writing—her report, no doubt on Dostun’s prisoners—but he could have infinite patience. He wouldn’t smoke, so there’d be no evidence with his DNA on it. His boots were like thousands of others in the immediate area, and he was careful not to touch anything. He saw the light go out and still he waited, for her to sleep deeply and soundly.

Some five hours after his satellite phone conversation with the Vice President, Burkholder tugged on a pair of leather gloves. Most of official Washington, DC, would be finding its way home through rush hour, but just after midnight here in Kabul, he looked forward to a different kind of rush.

Listen on these podcast services: