A trip to see some family in New England precluded writing a story for Week 12 of the Story Cubes Challenge, then along came the prompt for Week 13 in the midst of a lot of  house- and car-related issues. The result is you get a backwards two-fer–one story from two prompts.

I’ve written stories about the beginning of both Mai Fisher’s and Alexei Bukharin’s careers, so here’s a story about the end. The story is based on the actual arrest of Serbian General Ratko Mladic, who’d been hiding in plain sight in Serbia for more than fifteen years after his indictment as a war criminal for the massacre of Bosnian Muslim men and boys near the U.N. Safe Area of Srebrenica in July 1995. Several stories in my collection, Blood Vengeance, deal with this event, the largest incident of genocide in Europe since World War II.

The character Vojislav Ranovesic is from an unpublished novel of mine entitled Self-Inflicted Wounds. It’s also based on actual events in the late 1990’s and 2000 surrounding the murder of dozens of associates of and government officials for Slobodan Milosevic. Mai and Alexei go in to try and find out who is behind the murders, and Ranovesic is the “one good cop left in Yugoslavia” whose help they enlist.

Here are the two rolls of the cubes: 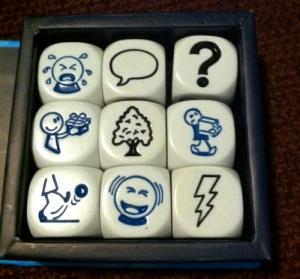 And here’s what I saw:

The story is “26 May 2011,” and if you don’t see the link in the title, hover your cursor over the Spy Flash tab above and select it from the drop-down menu.

If you’d like to try the Story Cubes Challenge, pick a prompt from the left, write a story of any length, and post a link to it on Jennie Coughlin’s blog.

In just one more week, the Rory’s Story Cube Challenge will be three months old. Time flies when you’re having fun.

In a past story, I delved into how Alexei Bukharin came to The Directorate (“Desert Nights and Weeping Flowers“), so I thought it was time to get a glimpse into why Mai Fisher chose her life’s work. This story also gave me an opportunity to explain why espionage intrigues me–the casting aside of morals and norms to assure a country’s integrity may seem a contradiction in terms, but it’s beyond interesting to learn whether a newly minted spy can handle these “shades of gray.”

So, initially, I was going to name the story “Shades of Gray,” for reasons that are obvious when you read it, but I don’t want to imply any connection with a current “book” that’s all the rage for some reason I don’t quite grasp, Fifty Shades of Gray. The story does end up being the longest (at about 4,300 words) of all the offerings in “Spy Flash” and probably doesn’t count as flash fiction at all. Oh well.

Here’s the Week 11 roll of the cubes:

And here’s what I saw: (l. to r.) building/hotel; reading; footprint; credit card; die/roll of the die; fork in the road/at a crossroads; reaching/out of reach; moon; and house.

Here’s the link to “Family Matters.” If you don’t see the link, then hover your cursor over the “Spy Flash” tab above and select the story from the drop-down list.

Why don’t you give the story cubes challenge a try? Take a look at the picture above, write a story of any length, then post a link to it on Jennie Coughlin’s blog.

THERE'S NOTHING MORE NORMAL THAN AN EVENING IN NYC, RIGHT?