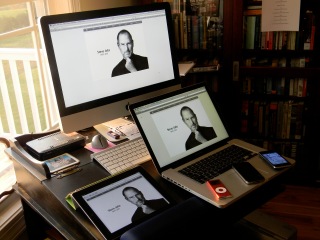 I was a late-comer to Apple. I was a PC fan and scoffed at the faintly elitist Apple nerds, but I eventually got tired of constant virus infestations on my PC, despite the fact I had the best virus protection money could buy. I also got tired of carrying a cell phone, a PDA, an MP3 player, and a camera in the same purse. Still, I wasn’t sure about going completely Apple.

Like an addiction it started with something small–the red iPod Nano (center of the picture above). I justified its purchase as being part of the Bono Red project, but never had it been so easy to download music. However, that didn’t eliminate anything from the purse, just swapped the iPod for the MP3 player.

The Nano was soon full to its 8gb capacity, so I upgraded to the iPod Touch, not pictured because I gave it to a friend when I bought the iPhone3 (to the right of the Nano above). Finally, the expiration of a cell phone contract coincided with the release of a new iPhone, and in 2009 I now had merged all my electronic devices into a single device. That wasn’t a leap of faith by Steve Jobs in my mind. Merely, it was the brainchild of a Trekkie like me who couldn’t wait for the day to hold Capt. Kirk’s communicator. To me, it was just natural.

After the 2008 virus-induced crash of my last PC and somewhere between the Nano and the iPhone3, I purchased a MacBook Pro (the laptop on the right of the picture) and gave away all my PC–towers and laptops. I was in love with computers again. When the iPhone4 (far right of the Nano above) came out I was almost first in line. For Christmas of 2010 I gave myself an iMac (background in the picture above), followed a few months later by the iPad1 (not pictured). The iPad1 went to my goddaughter when I bought the iPad2 (on the left of the desk in the picture above). The MacBook Air is on this year’s Christmas list.

As innovative as Windows was in the day, Apple succeeded because of Jobs’ concept of minimalism. Even the first MacIntosh was sleek and futuristic compared to the PCs of the day. The Apple OS was easier to use, more intuitive than Windows’ innumerable iterations. Jobs took an idea for his own personal user needs and made it accessible to the rest of us. You didn’t have to verge on being a programmer to operate Apple products.

Yes, I’m now an Apple geek, thanks to Steve Jobs. So, thank you, Steve Jobs, for making our Star Trek dreams come true, and thank you for the face of courage against that horrid enemy, cancer. Rest in peace, though I’d like to think of you as just plugged into cyperspace forever.

One thought on “Thank You, Steve Jobs”

Switching from historical espionage to mystery is daunting, but not why you might think. My spy stories have an element of mystery to them.