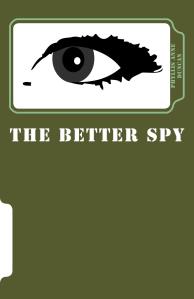 It’s official! My newest collection of short stories about the globe-trotting U.N. spies Alexei Bukharin and Mai Fisher, The Better Spy, will be released as a paperback and an eBook on July 28, 2015!

You first met Mai and Alexei in Blood Vengeance, Spy Flash, and My Noble Enemy (a Spy Flash novella). The Better Spy isn’t exactly a continuation but, rather, another piece in the mosaic of these two characters’ lives.

What is it about?

“The defining mission of UN covert operative Mai Fisher’s career came in the mid-1980s when she went undercover in the IRA. It was a mission she barely survived, when a shipment of Semtex she intended to destroy before the IRA would distribute it to various cells exploded too soon. Nine people, including a man she’d come to love, died, and she carried the guilt for the rest of her career. Nearly three decades later, a dying soldier has a secret he wants to tell her, one that will change everything.”

You can pre-order The Better Spy starting today. Click HERE to pre-order. Enjoy!

Every Moscow Rule has a story.