Wait, we’ve got a few months to the new year, don’t we?

I’m working on a little project to update the covers of my short story collections to make them stand out more. It’s been fun and has stretched my PhotoShop skills, but I like the results.

Fences and Other Stories

This was a collection of some literary and fantasy stories, ones I’ve always been fond of. Here’s the cover I selected from CreateSpace when I published the collection in 2012.

Not bad, but I could do better–or so several people told me. Four years later, I know about a great site called Pixabay, which is a large repository of public-domain photographs. You can use the photos commercially and without attribution–though I’ve at least given Pixabay an attribution. Pixabay’s selection is extensive, though the more obscure or detailed you get in your search, the fewer returns you get.

The title story for this collection (“Fences”) involves a white, picket fence, which this cover doesn’t evoke at all.

A search on Pixabay, and I got more than enough to choose from.

I selected this one, imported it into PhotoShop, added the title, subtitle, and byline (of 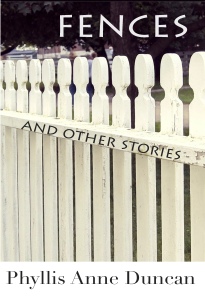 course), and this result, I think, is more true to the title story.

This is one of the advantages of indie publishing: If you want to refresh a cover or even the interior (I, uh, may have found a few typos.), it’s relatively easy to do. Your book isn’t available for sale for a couple of days until the databases communicate, but for me, it was worth it for a better-looking cover.

I used to be into minimalist covers. I wanted people to be attracted to the story inside, not pretty cover art. Yes, I was naive. When Blood Vengeance, my first collection of espionage stories came out in 2012, I thought this cover, again from CreateSpace, was eye-catching. I liked the cover color and the stark font for the title.

It resonated with me, and with some readers, because when I sold it side-by-side with another book, which had art on the cover, the minimalist Blood Vengeance cover out-sold the other.

After a few years of reflection, and learning about the importance of a good cover for an indie-published book, I came to realize the cover was dull as rust.

Another excellent resource for indie authors is SelfPubBookCovers. For relatively low prices (most well under $100), you can purchase a professionally designed cover, which you can customize yourself, either on the site or in PhotoShop, which is what I did. (It can also be imported into other graphics programs and sites, e.g., Canva.) For the price, you get a 300 dpi jpeg suitable for a print cover and a 72 dpi jpeg for a Kindle or ebook cover. All you have to do is give an attribution to the cover’s artist, which SelfPubBookCovers provides.

You can also pay extra for more customization, including a back cover and a spine, and for additional covers for a related series of books. I purchased a cover from SelfPubBookCovers for my 2015 novella, The Yellow Scarf, and I was wowed by the result. 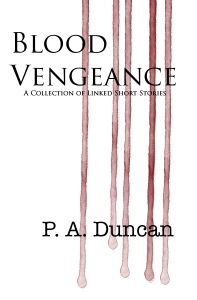 Here’s the new cover for Blood Vengeance. Again, I feel as though this cover, even in its simplicity, is more eye-catching and relates better to the title story (“Blood Vengeance”).

The other thing you may have noticed is a slight change in the byline. The espionage genre is mostly a man’s game. That’s changing. I’m certainly not hiding the fact I’m a woman who writes about spies, but bearing in mind the person who picks up a book on the basis of its cover, why not give myself a little extra step on that break-in ladder? Again, I don’t hide my gender–you’ll find it on the “About the Author” page in the book.

And before the year is out–[insert drum roll here]–cover reveals for Spy Flash II and my first novel, A War of Deception.

Yes, you read it here first. In 2017 my very first, standalone novel will come out.

Are you as excited as I am?

Listen on these podcast services: