Just in time for the one year anniversary of when-it-all-changed-for-the-worst, I’m releasing the conclusion to a story I published earlier this year. Who Watches the Watchmen? is a novelette about people colluding to rig an election. (Timely, right?)

You can get Who Watches the Watchmen? for your Kindle by clicking here, or if you want a paperback, click here.

The cover for WHO WATCHES THE WATCHMEN?

Who Watches the Watchmen? is a standalone, but other aspects of the story still rattled about in my brain. So, I wrote some more, a natural extension of the original story.

The second novelette is called Hidden Agendas, and those sneaky agendas are everywhere–from my fictional espionage agency The Directorate to the White House itself. Yes, ripped from the headlines, as they say, but fictionalized.

Here’s the back cover copy:

In this sequel to WHO WATCHES THE WATCHMEN?, all good things must come to an end…and a new beginning.

For Mai Fisher, the political climate in the United States after the election of a conservative billionaire, who’s surrounded himself with deconstructionist, ultra-rightwing advisors, has become too uncertain. After the incident where her own assistant director betrayed information to a political campaign, she’s on edge, especially after learning he intended to “give” The Directorate to the new administration as its private intelligence service.

She comes to the reluctant conclusion The Directorate has to cut ties with the U.S. and move to a more neutral location. Then, she has to convince her husband and former partner it’s necessary to leave their home of twenty-five years behind and move to a new country.

Mai can’t resist, however, executing one final act of subterfuge before she leaves, a reminder to those alt-right advisors…she’ll be watching.

Here’s a peek at part of the cover: 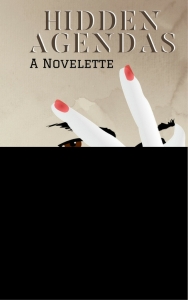 Want to see the full cover? Hidden Agendas will be released for your Kindle and as a paperback on November 1, 2017.

In a Taliban-free Kabul, U.S. dollars can buy almost anything.